Many people involved with the installation of television aerials and signal distribution systems are now aware of the problem of TETRA interference. A significant number of television interference problems have arisen in some neighbourhoods when new TETRA base stations have opened. This PROception information FAQ explains the main issues and shows how PROception products can help achieve interference-free reception.

TETRA (TErrestrial Trunked RAdio) is a digital mobile radio system for voice and data. It's replacing older analogue private mobile radio (PMR) systems, particularly in larger networks. Adopted in the UK by police forces and other emergency services and operated by Airwave Solutions. TETRA base stations are running in many locations within the UK and the ROI and are similar to the digital mobile phone networks, but generally with larger cells higher transmission powers.

Why does it cause TV interference?

TETRA base stations usually transmit in the frequency band 390 to 400 MHz just below the UHF TV band. The proximity of base stations, particularly in urban areas, can result in TV aerials being exposed to quite high interfering field strengths sometimes enough to produce interfering signals of 100 dBµV (100 mV) or more at the aerial terminals.

The strong TETRA signal reaching the input of the receiver (and any pre-amplifier or distribution amplifier in the system), even though out-of-band, can cause interference to the wanted TV signals by overloading the input stages of the receiver or amplifier, causing the effects known as inter-modulation and blocking.

What sort of interference?

The appearance of TETRA interference can vary considerably, but typically it tends to look like horizontal bands of pattering on the screen. Tyre tracks across the picture is one description that has been used. The sound is usually only affected in severe cases. 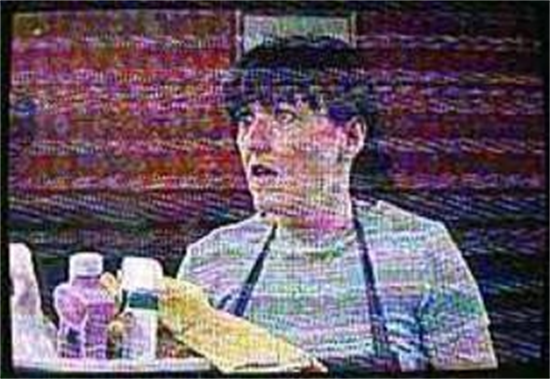 When is the problem likely to be worst?

Some factors which will tend to increase the risk of interference are:

Does it affect Digital TV?

Yes, but because of the usual 'digital cliff' effect the interference does not show up until it becomes fairly severe, after which total failure of reception follows rapidly. Don't forget though that the presence of lower-level interference is effectively eroding the margin against other things, such as multi-path and co-channel interference.

Whose problem is it?

Any interference is almost certainly due to a lack of immunity to strong out-of-band signals in the receiving installation. This means it's the responsibility of the householder or the owner of the TV distribution system to fix any problems.

What can be done?

The main weapon against out-of-band interference is filtering . Traditionally most UHF masthead and distribution amplifiers designs have only used fairly basic input filtering often giving little or no rejection in the 390 to 400 MHz transmit band. In existing installations TETRA interference can often be cured by fitting a suitable filter (such as a UHF highpass or bandpass filter) ahead of any active equipment in the signal chain.

What about new installations?

With the VHF and UHF spectrum getting ever more crowded it has become important to ensure that new installations are reasonably immune to strong out-of-band signals. In the future the number of transmitters operating in urban environments will only increase. The aerial and system installer that recognises this and avoids using amplifiers with 'wide-open' (poorly filtered) inputs will have a clear advantage.

Many PROception amplifier products include 'built-in Airwave TETRA filtering' at the front-end. This typically provides around 30 dB rejection at 400 MHz and below and will contribute to making an installation TETRA-proof in all but the most severe locations. The use of quality filtered amplifiers must of course be combined with good installation practice, such as the use of screened components throughout and CAI benchmarked-certified cable. One more rule that cannot be stressed too highly is to avoid using excessive amplifier gain for example the PROception proMHD11L 'low gain' (+9 dB) masthead amplifier has sufficient gain for the majority of domestic installations.

Images are reproduced with the kind permission of Wright's Aerials (interference example).